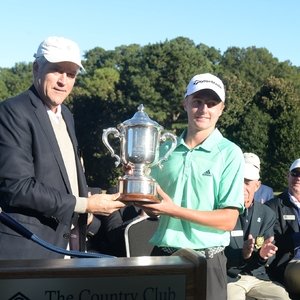 Spartanburg, S.C. - Greeted with a breezy wind and chilly, below average temperatures, players teed off for the final round of the 24th Bobby Chapman Junior Invitational at the Country Club of Spartanburg in Spartanburg, South Carolina.

Beginning the day with two players from Florida atop the leaderboard, things would get interesting as the lead group made the turn to the back nine. Fred Biondi (Port St. Lucie, FL) still maintained a share of the lead but not with Joseph Pagdin (Orlando, FL). Instead, it was South Carolina’s own Jonathan Griz (Hilton Head Island) who made a charge on his front nine setting up a shootout as the final round entered the finishing holes. Griz would make four birdies on the back nine and post the low round of the tournament, seven under, 64. As Biondi faded, Gordon Sargent (Birmingham, AL) pushed for a playoff as he entered the 18th hole, but a long approach shot followed by a chip shot that would come to rest 20 feet short. Sargent would miss the par putt to force a playoff, placing him in solo second place and giving Griz the outright title of the Bobby Chapman Junior Champion.

Griz, a 2022 graduate, came into this event with fresh eyes. Never playing in the event before, he had a mindset of knowing he could play with the best and wanted to prove that to the field and himself. With an opening round of even par – Griz entered the final round knowing he could post a low round and did just that. With six birdies, one eagle and one bogey on his round – he would cruise to a prestigious victory. When asked about what this win means to him, Griz expressed “to have my name on a trophy with guys like Lucas Glover, Peter Uihlein and my good friend Trent Phillips – it’s such an honor and lets me know I can play with the best.”

The first champion from South Carolina since Phillips, a University of Georgia freshman who won in 2016, Griz was eager to answer that he will be back to defend his title, noting he will go deep to try and set some records. In total, 33 of the country's top 100 players teee it up in Spartanburg, testing their ability against the field and a Donald Ross designed course. Players represented 23 states and a total of 57 players have committed to play at the collegiate level. “This field represents some of the best players in the country and substantiates why the BCJI is recognized as the top ranked two-day junior tournament in the country,” noted Tournament Chairman Doug Smith.